Farmers from across the Southern Riverina are joining together to launch Farmer eXchange, a collaborative web application to increase knowledge-sharing among farmers.

Due to launch early next year, the brainchild of Deniliquin-based Farm Table founder Airlie Trescowthick has received $168700 in funding from the Farming Together program to develop the project.

Ms Trescowthick said she came up with the idea after months of consultation with farmers and hoped the app would play a role in encouraging farmers to share their own experiences and crowd-source advice from their peers.

The project has been driven by an advisory board of 12 farmers including fodder producer and agricultural advocate Aimee Snowden from Tocumwal, Deniliquin mixed irrigation and livestock farmer Josh Small and mixed farmer David Armstrong from Junee.

The Farmer eXchange will be accessible to farmers signed up to the Farm Table from early April 2018.

Farmer registration to the Farm Table is free. 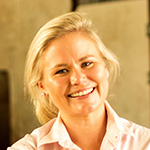 Airlie Landale is an Agricultural Economist and Independent Consultant at Landale Rural who works part time on her family farm out of Deniliquin. With a background in commercial business, farming and corporate agriculture and a passion for the Australian agricultural industry. Prior to Farm Table Airlie worked at Macquarie Bank as an Agricultural Business Analyst and was named as a ‘Tomorrow Maker’ by the AMP Foundation. As well as this Airlie was NSW Rural Young Achiever of the year.